www.COREresonance.com
by J.Hamilton
004
Can you imagine a happy planet?
It’s a good start but we each need to do far more! 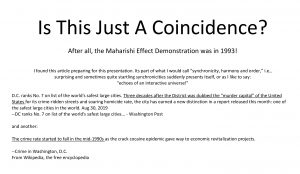 I found an article from the Washington Post the same morning I was originally preparing for this presentation. I then looked a bit farther and found another confirmation in Wikipedia.

Looking at history, the Maharishi Effect Washington DC demonstration was conducted in July of 1993 and in review thirty years later the media is reporting that a huge shift in the murder rate and safety took place in Washington DC.

Could this just be a coincidence?

The crime rate started to fall in the mid-1990s as the crack cocaine epidemic gave way to economic revitalization projects.
–Crime in Washington, D.C.
From Wikipedia, the free encyclopedia

Is this just a coincidence or did the Maharishi Effect demonstration in Washington DC, the murder capital of the United States in the 1990’s, deliver reform to a city that was spiraling out of control?

If this is the case, this demonstration of the Maharishi Effect, a non-traditional science, is something we need to be looking at as we learn how to rely on tools that generate peace in our world.

Because human beings are by and large creatures of unconsciously established patterns and habits, we need non-traditional “exponential” tools to solve problems and reset humanity to a higher vibration. To do so without fighting “what’s wrong” delivers an entirely different approach to making the world a better place.

And curiously, the Maharishi Effect bypasses the mind of man and the potential for manipulation or abuse. The Maharishi Effect operates at an all-together different scale of order because we “let go” to achieve results! As we plug into what’s true, the mind and particularly the ego is left behind!

Understanding and harnessing the Maharishi Effect is a very good use of our time.