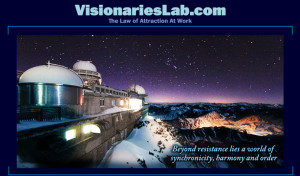 VisionariesLab shares space with the Pic du Midi Observatory in the French Pyrenees. And while they don’t yet know I have taken up residence in the basement, I am soon to let them know : ) It is a great spot to survey the world, contemplate the heavens and be reminded we are not “flatlanders.”

While there are a number of reasons I love this photo, one includes the fact that the observatory appears to be voyaging across the top of the world. Not only is this photo an awesome vantage of the Pic du Midi Observatory with the La Mongie ski resort in the foreground and the distant glow of urban areas in southern France and Spain on the horizon, it also showcases the constellations of Orion and Gemini with a bright planet Mars very near the top edge, left of center.

Having an extensive background as a sailor and past owner of a large diesel pusher motor home, Pic du Midi seems to wrap them both up as one, i.e., a “land yacht” cutting through the mountain tops of the world, not so different from a yacht moving through the water with the attendant bow and quarter wave.

Try to be discrete (for the time being) if you wish to come by to say hello.