www.COREresonance.com
by J.Hamilton
008
Can you imagine a happy planet?
It’s a good start but we each need to do far more! 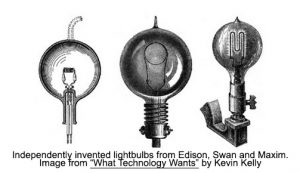 There was a paper written in 1922 by two Columbia University professors titled Are Inventions Inevitable? A Note on Social Evolution. They discovered in looking at 400 years of history, back to the 1600’s, that a significant number of major inventions, discoveries and processes were discovered by multiple parties simultaneously — independently but concurrently. And of course, this was done without any of the communications mediums we so take for granted today.

Examples of several of the 148 major inventions and discoveries that were developed simultaneously in our past:

As this phenomenon was researched and evaluated in more modern times, it was discerned that:

“90-98% of patent lawsuits are filed against independent inventors and not copiers.”
—Mark L Lemley, Stanford School of Law, (2011)

I learned a very long time ago studying dowsing that everything that’s known or ever will be known is out there in the Cosmos and it’s just a matter of tuning into it. All inventions, discoveries, processes, insights and intuitions come from the human being’s capacity to sense outward and listen; to listen to the Cosmos expressing and accordingly “invent, discover and otherwise create new things.”

Hint: We create because of the feelings it generates when we do so. For example, why do we paint art? Simply to hang stuff on walls? Why do we write? Why do we take trips? Is it because of the creativity flowing through our nervous systems as feelings as we venture forward? Absolutely!

What is pleasure but high quality feelings coursing through our nervous system? Curiously, the quality of our inner feelings dictate how closely we are on track with our creations in tandem with our interaction with the Universe expressing through us!

Of course, we all have this capacity and some more developed than others, but the underlying secret is a quiet nervous system, allowing, sensing outward and receiving back!

Enabling our natural state of connection with Source is a very good use of your time!