www.COREresonance.com
by J.Hamilton
007
Can you imagine a happy planet?
It’s a good start but we each need to do far more!

Dr. David Hawkins wrote Power vs Force in 1985. The Map of Consciousness was published as part of Power Vs Force illustrating a number of very powerful understandings.

First, the Map is a scale of 0 to 1000 based on research with kinesiology as used by Dr David Hawkins.

•  The lower end of the scale approximately 20 to 175 revolves around “stuckness,” i.e., resistance and rigidity to life and its expressions. It identifies the unconscious states of apathy, fear, grief, anxiety, rage, anger, etc., up through pride at 175.

•  200 to 700 (approximately) on the Map includes the conscious states of neutrality, willingness, acceptance, reason, joy, love and peace.

•  700 on this Map identifies the beginning of the states of enlightenment.

200, labeled courage, is the break point on the Map where we move out of unconscious “stuckness,” rigidity and resistance and the lower realms and begin to move into the conscious states of neutrality and acceptance of life.

A couple of interesting points about the Map of Consciousness by Dr. David Hawkins:

•  There’s a second interesting concept about the Map of Consciousness by Dr. David Hawkins. As we move up the Map, as we become more conscious, as we blend with the frequency of God more effectively through our nervous system’s subtle sensing out and receiving back, we become exponential in our contribution and our actions.

What does this mean?

Dr. David Hawkins, whose model was rigorously tested by his team of kinesiologists says:

According to the Map of Consciousness, we now have a 2nd non-linear science for quelling distortion on this planet. If one person at 700, admittedly a very high number, can counterbalance the negativity of 70 million people, what could 6 do, or what could 100 do? Or what could 1,000 or 1 million do?

And, of course, so many more people will follow the path to peace simply because it becomes available.

Dr. David Hawkins says that people generally advance 2 points on the Map in a lifetime. It’s a pretty broad statement but because the Map is exponential, the difference between 200 and 202, and 400 and 402 can be a big, big difference.

I wrote in the year 2010 that I believe CORE Resonance is capable of advancing people as much as 200 points in a relatively short period of time by quieting the nervous system and enabling our natural state of connection with Source.

This transition can happen in a very short period of time — particularly as members of a Colony™!

Understanding the exponential multipliers available to us as indicated by the Map of Consciousness is a very good use of your time!

Want It Now?
The Neurofeedback Research For World Peace Study Guide
text/audio format is available in a single download.
For more information

The Synopsis of The Twelve Premises of CORE Resonance Colonies™ 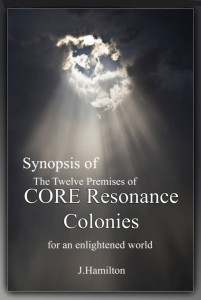 .. is about a solution to the problems of mankind based on harnessing non-traditional but ever-present sciences and tools available to us right now.