And then all of this flowed into… 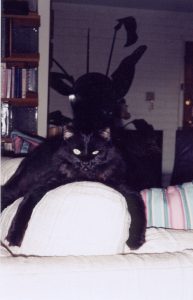 I decided to make a note about my cat’s passing here. Tarbaby was my cat for just a few days short of 15 years. And, as I have always meditated, she has always meditated. When I got out of the shower in the mornings, which is my normal time to meditate, she was always waiting on me.

Occasionally, I would get distracted from my perceived schedule and she would wait for 30-45 minutes and then go on about her day. Or, I would pick an entirely different part of the day to meditate and she would usually show up and give me the slightest hello with her tail.

She was always an inside cat and I was always an inside guy. I worked from my home the entire time I had her.. She was at my feet every day as I wrote my book Visionaries Thrive In All Times and would show up at my desk when I talked to certain people or was involved in certain types of telephone conversations. She was a very good friend and always there. Always came by the bed when I first woke up and always came by before I went to sleep.

I put her “to sleep” on May 26, 2008. I had never been present to the death of a loved one and felt it was a very powerful experience. When the doctor came back in and pronounced her “gone” via a stethoscope listening for a heartbeat, I kept my hand on her for quite some time.

I realized that though her death had been induced by an injection, the announcement was greatly exaggerated. I believe she was in her body for quite some time after her heart stopped beating. She was completely still and very slowly faded from physicality as the individual cells faded, like light bulbs slowly going out.

She was a great friend. She served me in every manner possible as I attempted to do the same for her.

I learned more about love from that cat.

Effortless and unconditional; she was always there for me. I believe, in the momentary difficulty of my decision to put her “to sleep,” I was there for her as I always have been.

This was just another part of my contribution to having access to a very special expression of Innate Intelligence expressing itself through an animal living in my home.

It is my wish that we all learn to deeply love everything and everybody. I have never felt the expression of loving like I did with this cat to the chagrin of a few friends who would have liked the same attention.. To my friends I apologize, to my cat, I say, “I miss you.” 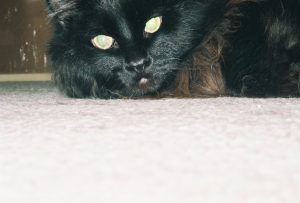 This is my dedication and memorial and remembrance to a true and very close friend. I will have a flower around here for a while but on this page I wish to dedicate everything that is important to life and living and letting go and loving and nonresistance and acceptance..

Today was a fitting day to hear the lyric “Please tell me who I am” (Logical Song by Supertramp) for which this is the actual end result of this interaction – a remembrance for my special feminine-energy cat buddy Tarbaby who now meshes with the Babaji energy and reminds me of the Divine Order of all things. What a sweet cat!

Wishing you love and the peace that passes all understanding..
Namasté
J.Hamilton
May 28, 2008

PS Ultimately, the above was a very powerful experience and in later reflection, I realized what really happened. I had complete love for Tarbaby. She was a reflection of the very best part of me – a part of me that really nobody has ever seen, a part of me that I was able to unequivocally and unconditionally flow to her.

When Tarbaby left, she left an opening, a portal if you will, for Babaji to come into my experience in a very powerful way. This lasted for about ten days to two weeks. In other words, in the very powerful expression of love I had for my cat, when Tarbaby suddenly left, there was a portal (of love) that Babaji was able to come in on. 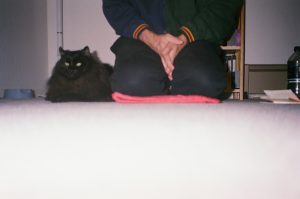 This is Tarbaby on her last day. She sits beside me during our morning meditation in Los Angles.

She was a Special Cat! My astrologer friend called her an exalted soul.

PS When I got Tarbaby she was a kitten and solid black; hence the name Tarbaby. I original named her “Friday the 13th” because I picked her from a litter on Fri the 13th, but Friday didn’t stick. Tarbaby also had incredibly long fur. Living in several places over 15 years, usually having her own bathroom (cat box in the tub, etc.) we once had a 5.25 inch hair specimen taped to the mirror as evidence! 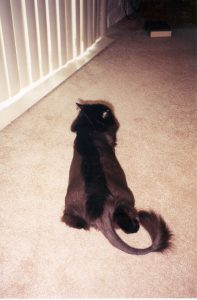 And then there were the haircuts. It took two days of about 45 min each to give her a good trim. I used two electric hair clippers because as one would get hot, I would switch to the other. We used to do mochican and then punk mochicans. While this cat might spend several months under the bed after a move from Sedona to LA for example, after a haircut and a coincidental party that same week-end or so, she would be out displaying her haircut to anyone who would check her out! 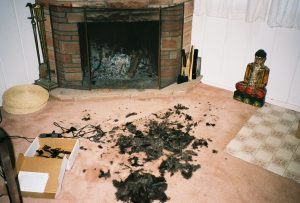