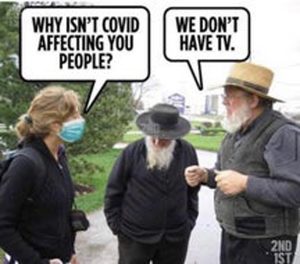 It looks like the “Covid v*ccine” is going to be far more dangerous than Covid itself. My first thought is, I know of more people who have suffered from the “v*ccine” than Covid. As the weeks tick on, this appears increasingly so. Included are four important insights identifying the shady world of Covid politics.

The “Covid v*ccine” was sold to the public over a six-month period based on a massive and organized fear campaign and emergency use authorization (EUA). And now we discover the “v*ccine” is actually a barely tested mRNA gene manipulation therapy paraded out “as if” it was a v*ccine. And, it is doing irreparable harm.

V*ccines and mRNA gene therapy are vastly different though this “mRNA v*ccine” is protected from malpractice and liability lawsuits similar to a v*ccine. Curiously, fortunes were made by a select few in a rush job to inoculate the public! That’s greed and the pharmaceutical industry doing its thing! And I hope nothing more.

Four Insights for your review:

2) Interview with the inventor of the mRNA v*ccine technology dated June 11, 2021

3) Suppression of ivermectin, a repurposed drug with an 86% success rate

4) A “Solutions Orientation” Statement by J.Hamilton

The 1st Insight is from a somewhat exasperated Dr. Mark Sircus of Brazil who I have been reading for several years. His article “Madness is Infecting the World of Medicine – Counting the V*ccine Dead” documents the June 25, 2021 release date of a Communicable Disease Center (CDC) report stating that 6,113 people died following COVID-19 v*ccine injections along with 5,172 permanent disabilities, 6,435 life-threatening events, and 51,558 emergency room visits. This report is from the CDC’s V*ccine Adverse Event Reporting System (VAERS), a U.S. Government-funded database that tracks injuries and deaths caused by v*ccines. The numbers are assumed to be vastly understated, i.e., possibly only 1% are actually reported.

The EudraVigilance database, which covers 27 European Union countries out of about 50 actual European countries, reports that through June 19, 2021, there are 15,472 deaths and 1,509,266 injuries from the four COVID v*ccines used there.

The 2nd Insight is a three-hour podcast interviewing Dr. Robert Malone, the inventor of the mRNA v*ccine technology dated June 11, 2021. According to Dr. Robert Malone, this mRNA gene therapy was designated to be used for emergencies only because of the inherent dangers of what is still experimental gene therapy. The CDC and WHO declared COVID an emergency which allowed them to bypass the law, normal channels of testing, peer review, and informed consent.

They purposefully disregarded and suppressed information about repurposed drugs ivermection and hydroxychloroquine known to be safe, to instead deliver a basically untested gene therapy on the unsuspecting public. See Front Line COVID-19 Critical Care Alliance and Dr. Dr. Pierre Kory touting the importance of ivermectin which I have been following since December of 2020.

• Dr. Robert Malone invented the mRNA and DNA v*ccine core platform technology. He has grave concerns about the lack of transparency of side effects, censoring of discussion and the lack of informed consent that these bring.

• The free SARS-CoV-2 spike protein is biologically active — contrary to initial assumptions — and causes severe problems. It is responsible for the most severe effects seen in COVID-19, such as bleeding disorders, blood clots throughout the body and heart problems. These are the same problems we now see in a staggering number of people who have received the COVID-19 “v*ccine”.

• The spike protein also has a reproductive toxicity and Pfizer’s biodistribution data show it accumulates in women’s ovaries. Data suggests the miscarriage rate among women who get the COVID “v*ccine” within the first 20 weeks of pregnancy is 82%.

• Israeli data show boys and men between the ages of 16 and 24 who have been vaccinated have 25 times the rate of myocarditis (heart inflammation) than normal.

• The COVID-19 injections have “emergency use authorization” only, which can only be granted if there are no safe and effective remedies available. Such remedies do exist including ivermection and hydroxychloroquine, but have been actively censored and suppressed.

•  There is some great coverage of this podcast by Dr. Joseph Mercola, one of the foremost Internet pioneers of alternative healing. Especially if you don’t have time to review the below podcast, you can find Dr. Joseph Mercola’s insight in his article titled: Inventor of mRNA Interviewed About Injection Dangers [here].

Insight 2 How To Save The World, In Three Easy Steps podcast with timestamp menu by Bret Weinstein (below)

Dr. Robert Malone, mRNA Vaccine Inventor, on the Bioethics of Experimental Vaccines and the ‘Ultimate Gaslighting‘ Note: gaslighting defined – manipulate (someone) by psychological means into questioning their own sanity.

The 3rd Insight identifies the suppression of ivermectin as a repurposed drug that reduces COVID-19 infection by an average 86%. The “v*ccine” was rolled out based on emergency use authorization (EUA), which can only be obtained if there are no other safe and effective alternatives. This is why the World Health Organization  and CDC refuse to recommend ivermectin even though their own studies show the death rate reduced by 72%!

It appears ivermectin information was intentionally suppressed to allow emergency use authorization. Ultimately, the question is why are such underhanded schemes at work? Is it just money and greed? We need to know. Please reference a second reference to the work by the Front Line COVID-19 Critical Care Alliance and Dr. Pierre Kory – a true pandemic hero.

Note: Dr. Mercola’s articles are each “fact checked” by 23 year investigative reporter Cindy Bevington Olmstead. Cindy has won more than six dozen state and national awards — 44 of them first place — during her tenure as an investigative journalist.

Insight 3a Also from Dr. Mercola: Everyone Who Gets the Jab Is Part of the Safety Trial

“The Moderna COVID-19 v*ccine has not been approved or licensed by the Food and Drug Administration, but it has been authorized for emergency use by the FDA under an emergency use authorization to prevent coronavirus disease 2019, for use in individuals 18 years of age and older.

There is no FDA-approved v*ccine to prevent COVID-19. The EUA for the Moderna COVID-19 v*ccine is in effect for the duration of the COVID-19 EUA declaration, justifying emergency use of the product unless that declaration is terminated or the authorization is revoked sooner.”

The 4th Insight. It is important to know the terrain that our lives and lifestyles are reliant and dependent upon. Undulations and distortions of this terrain (think air, oceans, food quality, attitudes, authority, and even our internal microbiome) affect each of us. The problem is when we turn our attention to the “problem,” we inadvertently become polarized by our attention to the problem which ties up our mental, emotional and otherwise strategic “resources.” In studying the “problem,” we may very well miss what is actually going on. See an important article titled Polarity and Vibrational Islands.

Solutions are not found fighting the problem or the study of problems as is commonly thought. This is how v*ccines came to exist. Studying disease delivered v*ccines instead of a solution.

How do we get there? I call it a solutions orientation. Ultimately a solutions orientation looks like grounding coherence into the problem; grounding coherence into our surrounding, i.e., our terrain. Coherence is so big it simply “snuffs” out problems because coherence dissipates dissonance and distortion. Problems simply disappear! Reference my article: Coherence Dissipates Distortion. This is how the Maharishi Effect works!

This is the purpose of CORE Resonance Colonies™ and 15 years of preparation for this exact moment which is clearly upon us. Colonies™ are groups of six who, becoming exponentially contributive by partnering with Innate Intelligence and refining and quieting their nervous systems, ground coherence into the world. Our terrain is made up of mass-mind consciousness, complacency, and tolerance, all of which have been shooting us in the foot! Yes, our terrain includes massive complacency and gives us the results we get. It appears the gov, an artificial entity, is trying to kill us; to thin the herd, so to speak.

We need to step into our power, i..e, our partnership with Innate Intelligence and we need to do it soon. Or we might be living in a very different world. Instead of reigning in the source of pollution, the gov is getting rid of us! Bill Gates has been saying this all along, in part because we don’t seem to be able to rule ourselves.

We need to learn to rule ourselves. And we don’t do it by grousing about gasoline prices or not being able to find our favorite potato chips, but instead by partnering with Our Maker, Innate Intelligence which gives us access to the internal governance that the rest of Nature already ascribes to. Left on our own, stripped of our natural state of connection with Source by gov and other institutions we assume to be helping us, we are about to lose our very existence. 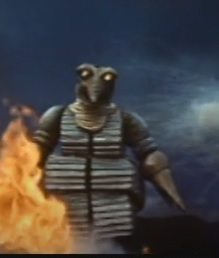 Now is a good time to get involved in a solutions orientation, ground coherence into the world, and take back what is ours.

One of my early recollections was the movie The Mysterians, a race of robots and space aliens who tried to conquer earth (1959). Not only did this movie scare me as a child but is a perfect analogy for aliens attacking humans.  Turns out artificial entities, (gov, corporations and other institutions) alien to our way of life, not only live on our backs but will devour us because they have no sense.

If you don’t think this is true, just wait six months. Or to speed things up, ask the increasing population of street people, or people who now live in their cars if this might be true.

It is time to wake up and get involved. We have choices of fighting what is wrong, or we can get on the solution side and start to make a difference. The nice part of becoming part of a Colony™, is that as we build our connection with Source, Guidance and “synchronicity, harmony and order” becomes vastly more available in our lives. This makes it much easier to be in the right place at the right time to most effectively contribute to the unfolding of what is next for humanity.

We each need an intact partnership with Innate Intelligence, to become part of what is true.

Download my 2nd book CORE Resonance: ultimate personal performance
which was designed as a guide for perilous times.
Normally $9.95 for FREE!
And, let me know what
you think.

Thanks for your time!

How to save the world, in three easy steps.
Bret Weinstein | DarkHorse Podcast

•  Dr. Robert Malone is the inventor of mRNA V*ccine technology.
•  Mr. Steve Kirsch is a serial entrepreneur who has been researching adverse reactions to COVID v*ccines.
•  Dr. Bret Weinstein is an evolutionary biologist.
•  Bret talks to Robert and Steve about the pandemic, treatment and the COVID v*ccines.
•  Steve Kirsh’s paper on COVID v*ccine reactions is titled Should you get vaccinated?

You can review the interview per the timestamps and your interests.

32:37 Robert’s friends at the FDA and the emergency use authorisation

01:04:43 Difference between the gene therapy v*ccines

02:01:42 Additional antiviral and Gilead overlooking it

02:13:53 Criticism of Fauci and mechanisms of action for ivermectin

02:17:35 Pfizer data on where the v*ccine spike protein goes

02:22:12 FDA signals of risk from v*ccines and auto-immune issues

02:40:54 Summary of risks including coagulation problems

02:50:00 Steve on vaccinating his children and the response he receives